How To Install Windows 7 Explained in Simple Manner

Kali linux is one of the most famous and favourite OS for the security researchers and hacking lover community .. For the windows users who all are new to kali linux they must know the basic commands of this OS because Linux provides Terminal to put to work with the commands.

So, without taking too much time ..Lets start !!

1. Command: ls
The command “ls” stands for (List Directory Contents), List the contents of the folder, be it file or folder, from which it runs. The most common options are -a (all files) and -l (long or details)
Tab completion is supported and may be configured with .inputrc
When output to file the files are listed one per line.
By default, colour is not used to distinguish types of files. That is equivalent to using –color=none.
Using the –color option without the optional WHEN argument is equivalent to using –color=always.
With –color=auto, color codes are output only if standard output is connected to a terminal (tty). 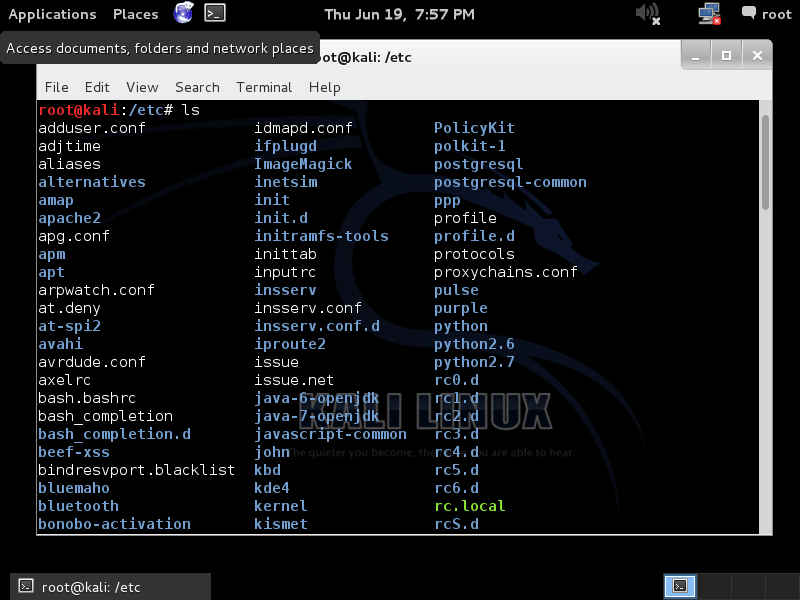 2. Command: lsblk
The “lsblk” stands for (List Block Devices), print block devices by their assigned name (but not RAM) on the standard output in a tree-like fashion.

The “lsblk -l” command list block devices in ‘list‘ structure (not tree like fashion).
Note: lsblk is very useful and easiest way to know the name of New Usb Device you just plugged in, especially when you have to deal with disk/blocks in terminal.

3. Command: sudo
he “sudo” (super user do) command allows a permitted user to execute a command as the superuser or another user, as specified by the security policy in the sudoers list.

NOTE:
sudo allows user to borrow superuser privileged, while a similar command ‘su‘ allows user to actually log in as superuser. Sudo is safer than su.
It is not advised to use sudo or su for day-to-day normal use, as it can result in serious error if accidentally you did something wrong, that’s why a very popular saying in Linux community is:
“To err is human, but to really foul up everything, you need root password.”

NOTE:
Directory can only be created inside the folder, in which the user has write permission. mkdir: cannot create directory `tutorial‘: File exists
(Don’t confuse with file in the above output, you might remember what i said at the beginning – In Linux every file, folder, drive, command, scripts are treated as file).

5. Command: chmod
The Linux “chmod” command stands for (change file mode bits). chmod changes the file mode (permission) of each given file, folder, script, etc.. according to mode asked for.
There exist 3 types of permission on a file (folder or anything but to keep things simple we will be using file).

Only read and write permission to all three.

Read, write and execute to owner and only execute to group and world.

NOTE:
One of the most important command useful for sysadmin and user both. On a multi-user environment or on a server, this command comes to rescue, setting wrong permission will either makes a file inaccessible or provide unauthorized access to someone.

6. Command: tar
The “tar” command is a Tape Archive is useful in creation of archive, in a number of file format and their extraction.

NOTE:
A ‘tar.gz‘ means gzipped. ‘tar.bz2‘ is compressed with bzip which uses a better but slower compression method.

7. Command: cp
The “copy” stands for (Copy), it copies a file from one location to another location.

NOTE:
cp is one of the most commonly used command in shell scripting and it can be used with wildcard characters (Describe in the above block), for customised and desired file copying.

8. Command: mv
The “mv” command moves a file from one location to another location.

NOTE:
mv command can be used with wildcard characters. mv should be used with caution, as moving of system/unauthorised file may lead to security as well as breakdown of system.

NOTE:
This command won’t be much frequently used in scripting but it is an absolute life saver for newbie who gets lost in terminal in their early connection with nux. (Linux is most commonly referred as nux or nix).

pwd Print Name Of Current/Working Directory
The pwd is an acronym for print working directory. The pwd command is considered as one of the most frequently used commands on Linux, AIX, HP-UX, *BSD, and other UNIX like operating systems along with the ls, and cd commands. It can be used for the following purposes under Apple OS X or UNIX or Linux operating systems:
=> Find the full path to the current directory.
=> Store the full path to the current directory in the shell variable.
=> Verify the absolute path.
=> Verify the physical path i.e exclude.

Share this Article if you really enjoyed it!! An Introduction to Kali Linux Basic Commands  via the given Social sharing buttons!! Thank you!

I am a technology enthusiastic, Researcher, Computer Engineer as well as the mind behind the atechlab.net – The Ultimate Cyber Tech Lab!
@09abhishek
Previous How To Root Android Without losing Android Warranty
Next Working Windows 7 Ultimate and Basic SP1 Activation Keys